Here are the words directly from Sir Amitabh Bachchan:

In the early hours of the morning, I rise and thoughts run to the incompleteness of the missive that reaches over 5000, and the left over of the night before at work, comes chasing the mind, of having completed the thousandth KBC episode, yes 1000 episodes since its introduction to the World of Television in the year of our making 2000.

Two thousand, one thousand and over five thousand !

The thousand has a ring about it, indeed it can be said the ‘circulars’ that follow after the numerals have ever been given a significant significance. And why that has been so, is difficult to assess. But the World has been done in such, from time immemorial, that we have accepted it without question and have formed our own limits of attained achievement and signature of success.

So yes, the 1000th episode on the platform of Kaun Banega Crorepati, was given its due importance and the request by the Channel to bring in the family on that revered and feared Hot Seat, was accepted.

And there we were, as per the pictures in the previous.

A delight, to be able to, not just test the ability of the ‘contestants’, but to give the freedom to express what many have felt has been undisclosed and kept behind closed doors. The banter of the family dining table, the repartee, and most importantly the several causes that the young at this age think about and work for.

An evening of great pride for the Father and Grandfather – for Papa and Nana !

The rapturous ecstatic appreciation by the Team that controls and runs the workings of this TV presence. The emotions that poured out at the collective viewing of both personal and highlighted incidents, and the appreciation of the masses in genuine applause.

My gratefulness then in abundance, ever.

Till the evening then and the hope and prayer of your ever committed support and affection. 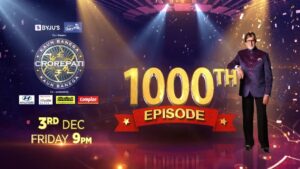